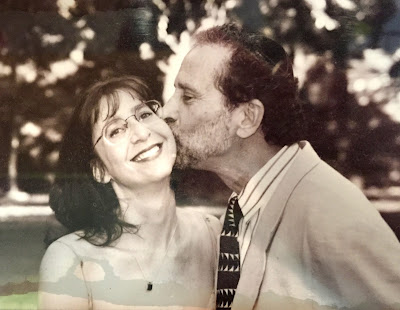 When I lost my dad, I lost the privilege of ever being able to be the child again. My father was my safe place, the grown-up I could turn to when I didn’t know the answer, or needed help, or advice.

When I was in high school, I got pregnant. When my mother found out, she handled it in her typical manner — by physically backing me into a corner and screaming in my face. Fortunately, she then called my father, who’s first words to me were “Are you okay?” And though I wasn’t, he made it ok.

In San Francisco many years later, David stepped on a dirty hypodermic needle and we found ourselves in the Emergency Room at 2am to get him on AZT. Once we were home and David was asleep, I spent the next few hours curled up on the floor of the bathroom crying because I thought my husband was going to die. At first light I called my Dad. I don’t remember what he said, just how much I needed him then and how relieved I felt to be able to talk to him then.

Years later still, David had to travel abroad for work just a few months after Anna was born. I was sleep deprived and overwhelmed. In the middle of the night the all of the smoke detectors in the house, which were connected electrically and could not be disabled, started their high-pitched beep every 60 seconds. Between a baby who was nursing every 2-3 hours and the stress of the shrill noise, I was a mess. Around 4am I emailed Dad telling him I was losing my mind. I can still feel the profound relief I felt when he called first thing that morning and said he was on his way.

And, of course, there’s a flip side to this. Not only can he not comfort me, but there’s no one to be proud of me. To feel nachas when I succeed at something. My father doesn’t know I paint, or that his granddaughter is everything he would have hoped. He doesn’t know that everything is turning out ok.

Maybe this is a part of growing up that everyone experiences. I know that many of my friends’ parents are going through both physical and mental declines, and that the children are becoming the parents more and more. And, of course, eventually we all lose our parents.

Eight years ago today I was sitting on my couch holding a sick 2-year-old when the phone rang. David answered and then came to me and said it was bad news. I asked what kind of bad news, and he answered “the worst.” I have spent the past eight years avoiding July 4th. We have spent at least four of these years in other countries on that date, in part to get away from the celebration. But today is different. Today I am ready to spend the day with friends and family, barbecuing in our backyard. I will make a toast to Dad, thanking him for giving me all that he did for the 39 years I had with him. It still hurts, but I’m used to being the grown-up now.
Posted by Strongrrl at 9:02 AM No comments: